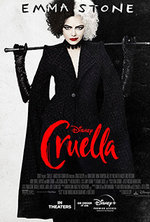 CRUELLA
not-rated
Comedy, Family
STARRING: Emma Stone, Mark Strong, Emma Thompson
DIRECTOR: Craig Gillespie
SYNOPSIS: A young grifter named Estella, a clever and creative girl determined to make a name for herself with her designs, befriends a pair of young thieves who appreciate her appetite for mischief. One day, Estellaâs flair for fashion catches the eye of the Baroness von Hellman, a fashion legend who is devastatingly chic and terrifyingly haute. But their relationship sets in motion a course of events and revelations that will cause Estella to embrace her wicked side and become the raucous, fashionable and revenge-bent Cruella. *Tickets are purchased at the gate upon entry.