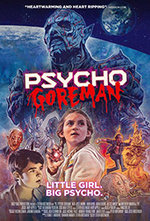 PSYCHO GOREMAN
not-rated
Comedy, Horror, Sci-Fi
STARRING: Nita-Josee Hanna, Owen Myre, Adam Brooks, Alexis Hancey and Matthew Ninaber
DIRECTOR: Steven Kostanski
SYNOPSIS: Siblings Mimi and Luke unwittingly resurrect an ancient alien overlord who was entombed on Earth millions of years ago after a failed attempt to destroy the universe. They nickname the evil creature Psycho Goreman (or âPGâ for short) and use the magical amulet they discovered to force him to obey their childish whims. It isnât long before PGâs reappearance draws the attention of intergalactic friends and foes from across the cosmos and a roguesâ gallery of alien combatants converges in small-town suburbia to battle for the fate of the galaxy. *Tickets are purchased at the gate upon entry.