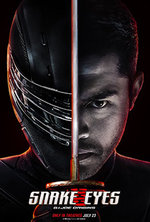 SNAKE EYES
pg-13
Action, Fantasy
STARRING: Henry Golding, Andrew Koji, Samara Weaving
DIRECTOR: Robert Schwentke
SYNOPSIS: Snake Eyes: G.I. Joe Origins stars Henry Golding as Snake Eyes, a tenacious loner who is welcomed into an ancient Japanese clan called the Arashikage after saving the life of their heir apparent. Upon arrival in Japan, the Arashikage teach Snake Eyes the ways of the ninja warrior while also providing something heâs been longing for: a home. But, when secrets from his past are revealed, Snake Eyesâ honor and allegiance will be tested â even if that means losing the trust of those closest to him. *Tickets are purchased at the gate upon entry.


On June 15, Los Angeles County has joined the state in lifting most COVID-19 restrictions including capacity limits and distancing requirements.


Please be advised, MASKS ARE STILL REQUIRED at all times. Any person who refuses to wear a mask will be asked to leave without a refund.


The swap meet is open Tuesday, Thursday, Saturday, and Sunday. If you attend the swap meet, be advised that: