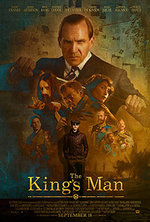 THE KING'S MAN
r
Action, Comedy
STARRING: Gemma Arterton, Aaron Taylor-Johnson, Matthew Goode
DIRECTOR: Matthew Vaughn
SYNOPSIS: In the early years of the 20th century, the Kingsman agency is formed to stand against a cabal plotting a war to wipe out millions. *Tickets are purchased at the gate upon entry.